So that’s what happened with the name and trying to define it is such a difficult thing to do. So initially if you think about it, it’s like the Kouples. Which I am not really sure what it is about, but it’s almost like a look book of stylish couples. So we do something similar - we come up with a theme to be styled in i.e. Military 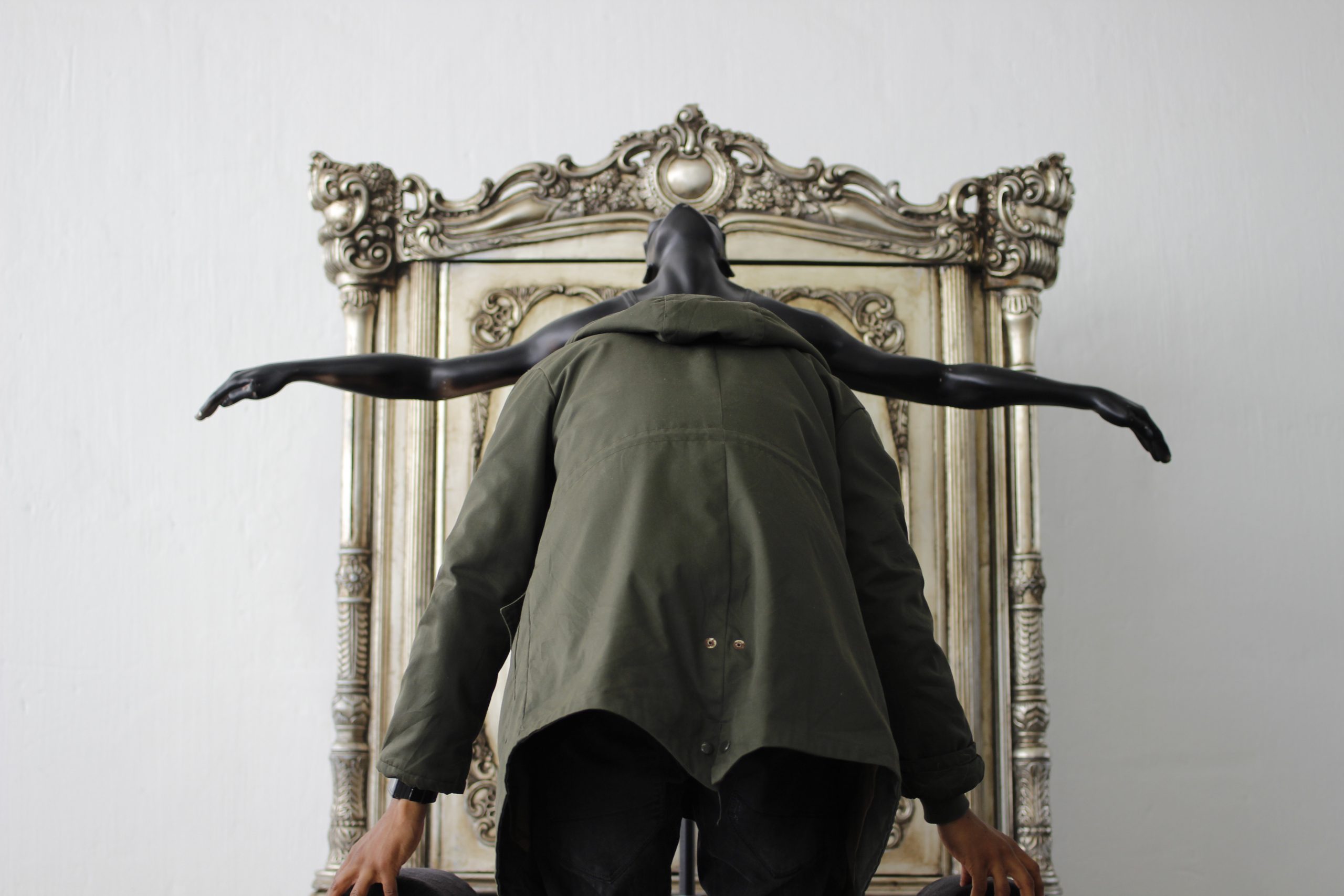 Khanya: So we’re starting to layout the magazine, we were busy with the contributor’s page and we made a place holder for KIMONSAM. Under the image we need a descriptor of what it is that you do…so we were sitting there like yeah, what do they do? -laughs So what do you guys do? Who is KIMONSAM?

Seboni: -laughing. KIMONSAM changes all the time. So how it started was Kim, who is Katlego Ida Mamabola and my name is Seboni Abner Magamtkla, Sam. So instead of us saying Kim and Sam we wanted to make it one person. It’s exactly that, so we were like KIMONSAM – one person. So Kimon is the name and Sam is the person.

Katlego: I came up with the name -Everyone laughs.

Seboni: Come on, be honest, actually it doesn’t matter. Anyway. So that’s what happened with the name and trying to define it is such a difficult thing to do. So initially if you think about it, it’s like the Kouples. Which I am not really sure what it is about, but it’s almost like a look book of stylish couples. So we do something similar – we come up with a theme to be styled in i.e. Military

Katlego: I come up with the outfits and style him by the way -laughing.

Khanya: But he came to me like he runs this shit, mean time it’s you -laughs

Khanya: But it does make sense, because Katlego has an image of what she wants to shoot for the day.

Khanya: So then you need to tell him, yo listen I want you to wear this, do that etc.?

Katlego: Well that’s difficult because he doesn’t really listen to me, he sometimes thinks he knows better, but it’s not really the case -Everyone laughs

Shannon: The honesty is coming out. So then every morning, you dress ready for a shoot, no off days, style has to always be on point?

Seboni: Yeah, we’re always prepared. Like the other day when you guys came to visit, I was in all black and the yellow cap. So I said to Katlego “You have that skirt, you know the black shirt I have and we just bought a yellow ottoman” she was like “yeah”. So we were like ok let’s shoot. That’s the actual day when KIMONSAM started. Then we were like, ok cool we can do this, make this a thing.

Khanya: So it was never planned?

Seboni: No, KIMONSAM just happened. She is getting into photography. She used to study fashion design.

Khanya: Why did you stop fashion?

Katlego: Uhm, it wasn’t as interesting as I had always imagined. I sold myself a dream and then I got confused and I always thought I would go back but then I found myself behind the camera instead.

Katlego: Yoh! While I was doing fashion I was taking pictures or using other people’s cameras. I enjoyed it. But I didn’t think I enjoyed it more than fashion. Then I realised I don’t really like the making of clothes. The sketching part and the getting dressed part was cool.

Khanya: Well it worked out. You behind the camera now, shooting fashion that you still enjoy, its just that now, you don’t have to make the clothes you shoot. You’re dating fashion.

Seboni: Yeah so that’s why KIMONSAM also happened, it was like it was always going to, with our combined past and current experiences.

Shannon: So do you think that KIMONSAM will ever become a label?

Seboni: We haven’t really decided yet, but yeah I am sure one day. I have this idea in my head because I currently work with this other guy and it feels like we moving into our own paths right now. He is heavy into denim, working with denim only. And I am all about street conscious brands. Almost high fashion but not. So that’s why the idea for Kimon Sam was an incorporation of both our works. Almost like a blog of our work separately as KIMONSAM, but brought together in visuals.

Khanya: I admire or find it really special that KIMONSAM can’t be defined. Because it can become whatever you want it to be. More importantly, whatever IT wants to be.

Seboni: That’s the whole point. Like I am going to mention the Kouples again because that’s the benchmark for me. When you see a Kouples billboard or whatever you never know exactly what it is. I want a similar feeling when people see KIMONSAM.

Khanya: Yeah I get you. Seeing as you’re not sure what it is, have you been thinking of projects to do with KIMONSAM?

Katlego: No. We basically wake up, think of something and then run with it that day.

Seboni: That’s how we tackle KIMONSAM daily. But I think future plans for me, are to have a capsule collection and for her to have a photo series. One of the series would be to have collages of print. So we’ll make collages out of print; then shoot it in interesting ways and possibly exhibit it. So we both will get to a point where we’re using our different platforms for the same end goal.

Khanya: So when are you breaking out?

Seboni: For me, we need to be really ready because I don’t just want to make prints. KIMONSAM has to be at a point where it’s street, high-fashion. People need to understand it. Like jackets, pants but with that thing that makes it KIMONSAM.

Khanya: Katlego, I want to ask you about your concepts. Do those concepts you shoot discover themselves or is everything planned. Like the concept you shot in the bath?

Katlego: It’s like half will be planned, or totally random. The shoot in the bath was on a random day. A completely  random shoot. So it depends how I am feeling.

Khanya: They’re so amazingly weird. We’re really looking forward to working on a collab project with you guys soon.